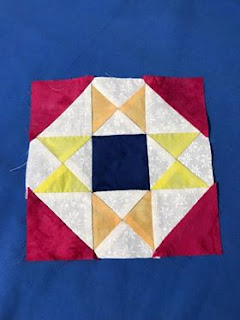 Block 5 in the Hand Pieced QAL is an Ohio star block with HSTs in the corners and it has been named Dorothy. Kristen explains why they named this star block Dorothy over in this blog post.

Each week's block builds off skill we have learned in previous blocks. While the individual blocks become more complex/detailed each week I've noticed that stitching them has become easier for me. While this block still took me three days to stitch they weren't full days. I think I had about an hour or so each day to sit and work on this block. That includes cutting and marking the lines.  It takes a bit to figure out just how to hold your hands, move your fingers, and obtain muscle memory. I also needed to find the right needle for me and the project. 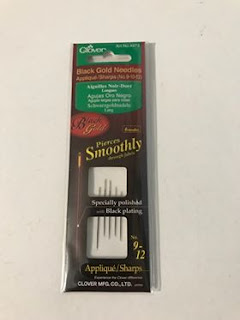 These are the needles that Kristen uses. You can see what's in her hand sewing bag over here.   While watching some of her tutorial videos she mentions how very sharp these needles are and I noticed that she could load a bunch of stitches on her needle. I've been on a quest to find the right needles for me and for each type of project that I like to work on. These needles are great for hand sewing. The only thing that could be problematic is that the eye is so small.  Some needles have an elongated eye no matter the needle size and some have basically a small round eye. These have little round eyes. It is worth occasionally using a needle threader 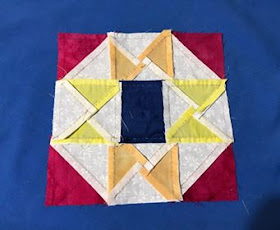 I'm also getting my seams under control. This block lays flat (without numerous blasts of steam lol) and it looks relatively tidy on the back.  After stitching each little unit I stopped and pressed the seams. While doing the actual stitching I like to hand press the seams but once all the little units were stitched I hit them with a nice hot iron and gave them a blast of steam to set everything in place. I spun the seams where I could and I only had to flip one or two seams in the final block. That was where the HST corners met up with the hourglass blocks.

The last four blocks are all star blocks and we can only guess which one will be next. We won't have to wait very long because the new block comes out bright and early Monday morning.

Thank you for visiting my blog! I read and treasure every comment that is left.